In memory of Ona:

Many of you have expressed concern about my faithful friend Ona after her accident last year. I have had the pleasure to see her getting stronger and healthier day by day following her operation and I was going to publish an update about how well she was getting along to share my happiness with you.

Sadly, faith interfered. On Sunday afternoon, March 14, my sweet friend gave up her breath. I later learned that it was her liver which stopped functioning as it had been infected with a multitude of small tumors, so small they could easily have been overlooked in an x-ray. Ona's appetite had been decreasing for a number of days and as I suddenly realized that she was seriously ill I rushed her to the veterinarian in Hudiksvall, Hälsingland - some 20 kms from the cottage where we were staying. One of the places where she liked to be the most. Just about twenty minutes after we arrived she died in my arms and the veterinarian never got the chance to do anything.

R.I.P. my sweet friend. The memory of you will stay with me forever. 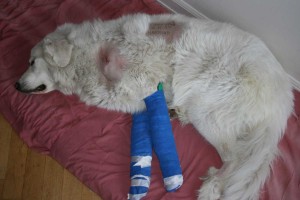 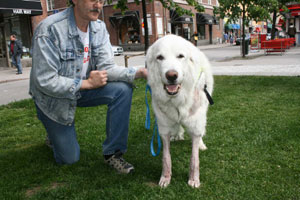 My best friend Ona, a Pyrenean Mountain Dog (Great Pyrenée) was seriously injured in an accident on May 31, 2009 and she had to undergo extensive surgery. She speedily recovered and during the summer of I sold off all records on this site at half price to help paying her hospital bills. The cost of her operation  were finally covered and she is now feeling great again, happy and cheerful as usual. Ona and I are very grateful for your support.